Development of the Leclerc main battle tank began in 1983. The first prototype was finished in 1989, and the first production model was completed in 1991. The Leclerc MBT entered service with the French army the following year.

It was named for General Philippe Leclerc de Hauteclocque, who led the French resistance during World War II. 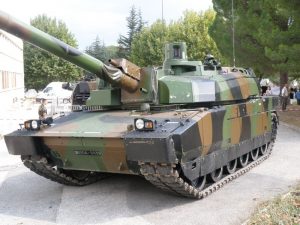 The Leclerc main battle tank is protected by advanced modular armor, a composite armor that combines ceramic, steel and Kevlar.   The armor is divided into separate modules. This is advantageous because if a module is damaged, it can be replaced easily.

There is a hydropneumatic suspension, with six pairs of road wheels. The idler is in the front and the drive sprocket is in the back.

Armored skirts cover the upper part of the suspension.

Fuel tanks can be attached to the rear of the hull to increase the Leclerc’s operational range.

The turret is power-operated and has full 360 degree traverse.

Main armament on the Leclerc main battle tank is a 4.72 inch (120mm) smoothbore gun that can be elevated from -8 degrees to +15 degrees. A computer is used to aim the gun.

The main gun has an autoloader that holds 22 rounds of ammunition that are ready for firing.

The anti-aircraft gun is externally mounted to the roof of the turret. It is operated by remote control.

There are 9 smoke grenade dischargers on each side of the turret.

Because there is no need for a human loader, the crew of the Leclerc is reduced to three men – driver, commander and gunner. The driver sits at the front left of the hull. There is some ammunition stored on his right.

Variants of the Leclerc main battle tank include an armored recovery vehicle.

A modified version of the Leclerc, which has been optimized for desert and tropical conditions, has been exported to the United Arab Emirates.  This variant uses a German MTU 883 V-12 diesel engine

The Leclerc main battle tank has been used in Kosovo and in Lebanon.