Great Britain’s Challenger 2 main battle tank is known for the instrumental role that it played during the 2003 invasion of Iraq, particularly during the capture of Basra.

The Challenger 2 was also used in Bosnia and Kosovo.

The Challenger 2 main battle tank was the first British tank to be developed entirely by a private contractor since World War II.

It was developed by Vickers Defence Systems, which is now known as BAE Land Systems

Vickers began working on the Challenger 2 in 1986. 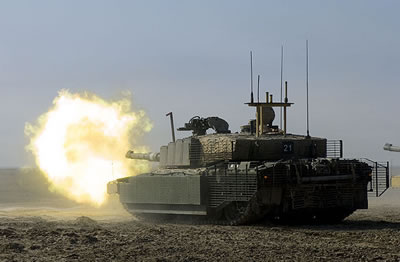 In 1991, the British Army chose the Challenger 2 to replace the Chieftain MBT.

The first production models of the Challenger 2 were finished in 1994 and the tank entered service in 1998.

However, most of the components are new, and the Challenger 2 can be considered a completely new tank.

Explosive reactive armor (ERA) can be fitted to the Challenger 2. 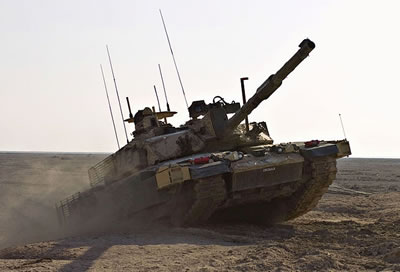 There is a new turret with new electronics, which are based on the electronics used in America’s M1A1 Abrams.

The turret of the Challenger 2, which has a well-sloped front and vertical sides and rear, has full 360 degree traverse.

The main gun, a fully stabilized Royal Ordnance  L30 4.72 inch (120mm) rifled gun with a chromed bore, can be elevated electronically from -10 degrees to +20 degrees.

The tank has the capacity for fifty 120 mm projectiles.

There are five pairs of smoke grenade dischargers.

A smoke screen can be created by injecting diesel fuel into the exhausts.

The glacis plate on the Challenger 2 MBT is well sloped, and the rear of the hull slopes inward sharply.

There is a Hydro gas hydropneumatic suspension, with six pairs of road wheels and five track return rollers. The idler is in the front, jutting ahead of the nose of the tank, and the drive sprocket is at the rear.  Skirts cover the upper part of the suspension.

Fuel tanks can be fitted to the rear of the tank to increase the range.

There is a recessed driver’s hatch

The driver has an image-intensifying day and night periscope

Hatch covers for the commander and loader open toward the rear of the tank. 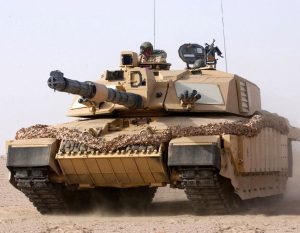 Both the commander and gunner have gyro-stabilized sights with laser rangefinders. The commander’s sight is panoramic and has a thermal imager. The gunner has an additional coaxially mounted auxiliary sight.

Night vision is provided by a Thermal Observation and Gunnery Sight II (TOGS II), which creates a magnified image for the gunner and commander.

There is a day sight for the loader.

The Challenger 2 MBT is the first British tank to have both a heating system and a cooling system in the crew compartment, to increase the crew’s comfort.

There is an NBC system in the turret bustle.

The fire control system on the Challenger 2 MBT is a digital computer that can be enhanced with a GPS satnav system and a Battlefield Information Control System.

Variants of the Challenger 2 main battle tank include a bridgelayer, an armored recovery vehicle, a combat engineering vehicle and a driver training vehicle.

The Challenger 2 main battle tank has been exported to Oman.