In 1984, the companies Oto Melara and Fiat Iveco formed a consortium to develop a series of fighting vehicles – a tank destroyer, an infantry fighting vehicle and a main battle tank – for the Italian army.

This led to the development of the B1 Centauro tank destroyer, the Dardo infantry fighting vehicle and the C1 Ariete main battle tank.

The Ariete entered service in 1995.

The C1 Ariete main battle tank has a fully stabilized Oto Melara 4.72 inch (120mm) smoothbore gun as its main weapon. The gun can fire both HEAT (High Explosive Anti-Tank) and APFSDS (Armor-Piercing Fin-Stabilized Discarding Sabot) rounds.  It has a fume extractor, a thermal sleeve and a muzzle reference system. 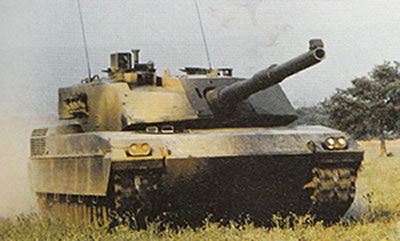 Ballistic computers allow the tank to shoot accurately while it is in motion.

The Ariete is protected by composite armor.

Blow-out panes in the ammunition storage area ensure that if there is an ammunition explosion, the blast will escape outward, not into the crew compartment.

There is NBC protection.

The C1 Ariete main battle tank has a torsion bar suspension with seven road wheels on each side of the tank. The idler is at the front and the drive sprocket is in the back.  Skirts cover the upper part of the suspension.

A crew of four mans the C1 Ariete MBT. The driver sits in the front right, with some ammunition stored to his left. The commander, gunner and loader sit in the turret – the commander and gunner on the right and the loader on the left.

The powerpack is in the rear.