Although development of the type 69 MBT tank is believed to have begun in the 1960s, and prototypes were thought to have been built in the 1970s, the first tank was not seen in public until 1982. 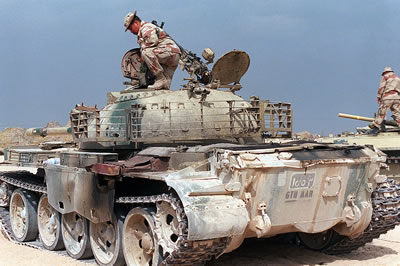 There is a laser rangefinder above and an infrared searchlight above and to the right of the main gun.

The Type 69 main battle tank can produce a smoke screen by injecting diesel fuel into the exhaust pipe.

The driver sits in the front left of the tank. Some ammunition is stored on his right.

Both the commander and the loader have cupolas.

The Type 69 main battle tank has infrared night vision and an NBC system.

There is torsion bar suspension with pairs of five road wheels and no track return rollers. There is a gap between the first and second wheel. Each wheel has five small holes.

The idler is at the front and the drive sprocket is in the back.

Variants of the Type 69 MBT include a command version, an armored recovery vehicle, a bridgelayer and a self-propelled anti-aircraft gun.

The Type 69 main battle tank is in service in China, Pakistan, Bangladesh, Iran, Iraq, Thailand, Myanmar and Zimbabwe.  A locally produced version has been built in Pakistan.