During the 1960s, the United States and West Germany began collaborating on the development of a new main battle tank that would be a match for any new tank that the Soviets were working on.

This new tank, which was designated the MBT-70, was to be equipped with a Shillelagh missile system.

The Americans wanted the MBT-70 to replace their M60 Patton MBT, while the West Germans wanted it to be a replacement for their Leopard 1.

As time went on and the MBT-70 project continued, the two countries began to disagree about the new tank’s design. In addition, costs began increasing dramatically.

West Germany withdrew from the project in 1969.

The West Germans went on to develop their own new main battle tank, the Leopard 2 MBT. 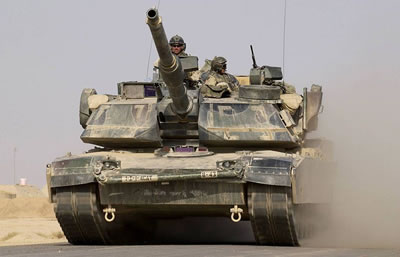 At the end of 1971, the US Congress canceled development of the MBT-70. The funds that were budgeted for the MBT-70 project were transferred toward the development of a new main battle tank.

Both companies built prototypes, which where then tested.

In November 1976, the Army announced that Chrysler had been chosen to produce the new tank.

In 1980, the first production model of the M1 Abrams MBT was finished. The tank entered service that year.

Originally, production of the M1 Abrams took place at both the Lima Army Tank Plant in Ohio and at the Detroit Arsenal Tank Plant in Warren, Michigan.

Later on, production became concentrated in the Lima plant.

Production of the basic version of the M1 Abrams MBT ceased in 1985.

The M1 Abrams main battle tank has two primary variants: the M1A1 and the M1A2.

Most of the M1 Abrams main battle tanks that have been built have been M1A1s.

In 2011, the US Department of Defense was considering temporarily halting production of the M1 Abrams for at least three years, starting in 2013, in order to save money on defense spending. 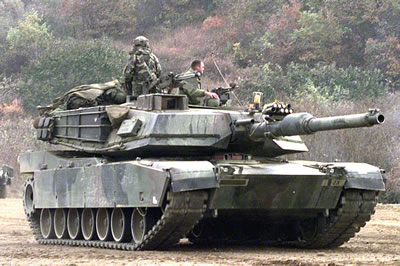 The M1 Abrams main battle tank has a low profile

Its glacis palate is almost horizontal.

The nose of the M1 Abrams slopes back underneath the hull. The sides of the hull slope inward, while the rear of the hull is vertical.

There are air louvers on the upper part of the hull.

The turret front is almost vertical.

There is an advanced torsion bar suspension, with seven road wheels and two return rollers on each side of the tank. A large idler is in the front. The drive sprocket is in the back.

Armored skirts cover the upper part of the suspension, the idler and most of the drive sprocket.

An advanced gas turbine engine, which can easily be maintained in the field, powers the M1 Abrams MBT.

The M1 Abrams MBT has NBC protection, a laser rangefinder and a ballistic computer. 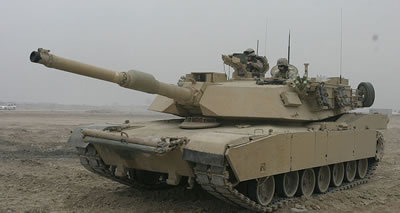 The M1 Abrams main battle tank is operated by a four man crew, consisting of driver, commander, gunner and loader.

The driver sits in the front center of the hull.  The commander, gunner and loader sit in the turret – the commander and gunner on the right and the roader on the left.

When the M1 Abrams was first designed, it was supposed to have a 4.72 inch (120mm) gun as its primary weapon. However, the gun that was needed had not been fully developed by the time the tank entered production, so the earliest models  used an M68 4.13 inch (105mm) rifled gun – a licensed version of Great Britain’s Royal Ordnance L7 gun.

The main gun on the M1 Abrams has a muzzle reference system and a fume extractor.

The turret has full 360 degree traverse, and the main gun can be power-elevated from -9 degrees to +20 degrees.

The Tank Urban Survival Kit (TUSK), which helps improve the tank’s chance of surviving in an urban combat environment, can be fitted to the M1 Abrams. TUSK was developed in the first decade of the 21st century.

The commander has a 360 degree camera and a remote weapons station that allows him to fire his gun from inside the turret.

A transparent armored gun shield protects the loader when he is firing his gun. The loader’s gun has a thermal sight system.

Crewmembers can communicate with infantry via a Tank Infantry Phone (TIP).

The M1 IP (Improved Production) Abrams main battle tank was produced between 1984 and 1986.

It has heavier armor than the basic version of the M1 Abrams, and it has an improved suspension and transmission 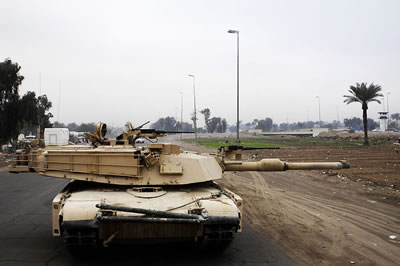 The M1A1 Abrams main battle tank entered service in 1985 and was produced until 1993.

A new turret was built for the M1A1, so that it could hold the larger gun.

Subvariants of the M1A1 Abrams main battle tank include: 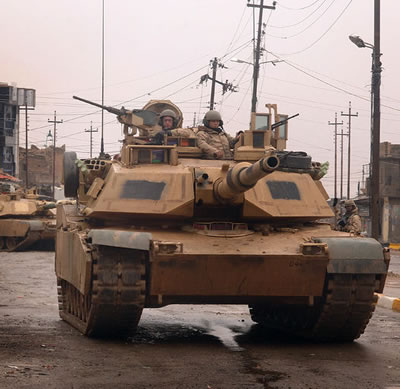 It has an Internal Position Navigation System (POSNAV), and an Inter-Vehicular Information System (IVIS) –   a digital command information system that allows the tank to share information with other combat vehicles, aircraft and command posts.

The M1A2 SEP entered production in 1999 and is still being produced.

It has a new operating system with increased memory capacity and an improved soldier machine interface (SMI).

Depleted uranium armor protection has been improved by the addition of graphite. 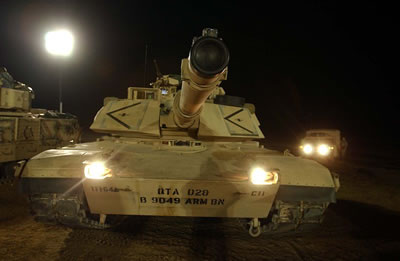 The M1 Abrams main battle tank was first used in combat during the 1990/1991 Gulf War. It proved to be vastly superior to Iraqi tanks, which were upgraded versions of old Soviet T-55s, T-62s and T-72s.

It is claimed that only 18 Abrams tanks had to be taken out of service during the war.

Friendly fire from other M1s posed more of a threat than fire from Iraqi tanks.

Not one Abrams tank crewman was killed during war.

During the 2003 Gulf War, the M1 Abrams continued to outperform Iraqi tanks.

However, by this time, the Iraqis had improved their fighting tactics.

Iraqi soldiers were able to disable some Abrams tanks by firing short range anti-tank rockets at the tops, rears and tracks of the tanks, or by firing machine gun rounds at sensitive areas of the M1 tanks so that the tanks’ electronic sensors would be disabled.

Nevertheless, despite the Iraqi’s improved fighting techniques, not one M1 Abrams tank crewman lost his life during the conflict.

The M1 Abrams main battle tank was also used during peacekeeping operations in Bosnia in 1995 and 1996 and during the 2001 invasion of Afghanistan. It has also been used in Kosovo.

Some M1A1 Abrams main battle tanks have been produced in Egypt.