The first prototype of the K1 main battle tank was finished in the United States in 1983.

In 1984, Hyundai Precision (now Hyundai Rotem) in Changwon, South Korea began producing the K1 main battle tank. The first production vehicles were finished in 1985 and the tank entered service in 1987. 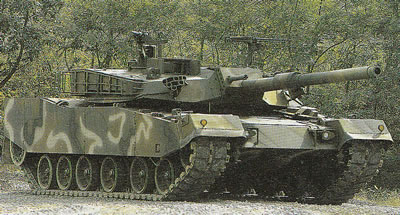 Composite armor that is manufactured in the United States covers the nose of the K1, as well as and the front and sides of the K1’s turret. This composite armor, which is of the Chobham type, is designated Korean Special Armor Plate (KSAP).

The K1 main battle tank has six pairs of road wheels. The drive sprocket is in the rear and the idler is in the front.  The return rollers and the upper part of the running gear are covered by a skirt.

Unlike the M1 Abrams, which has an advanced torsion bar suspension, the K1 main battle tank has a hybrid suspension. The front and rear wheel stations on the K1 have hydro-pneumatic units; the center wheel stations have torsion bars. This arrangement means that the driver can adjust the suspension according to the terrain.

The K1 main battle tank has a ballistic computer, a laser rangefinder, day/night sights and a fire detection/suppression system. The commander has a stabilized panoramic sight.

Most of the key subsystems of the K1 main battle tank were developed overseas.  The engine was designed by MTU of Germany. It is manufactured in Korea under license.  The sights and the laser rangefinder use American technology.

The K1A1 main battle tank is an upgraded version of the K1 MBT that entered production in 1995. Main armament on the K1A1 MBT is a KM256 4.72 inch (120mm) smoothbore gun. This is a licensed version of the M256 gun that is used in the M1A1 Abrams and the M1A2 Abrams. The K1A1 also has a new fire control system and a new ballistic computer, both of which were designed by Samsung. 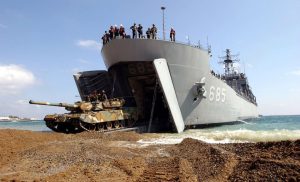 Variants of the K1 main battle tank include an armored recovery vehicle and a bridgelayer.