During the 1970s, Royal Ordnance Leeds, a British company that was later taken over by Vickers, developed an upgraded version of the FV4201 Chieftain main battle tank for export to Iran and Jordan. This tank became known as the Shir 1.

The Shir 1 had the hull of a late-model Chieftain and a new engine and powertrain.

The British were developing an improved variant of the Shir, the Shir 2, in 1979, when the Shah of Iran was deposed and the Ayatollah Khomeini became Iran’s new ruler.

The Shah had placed on order for a large number of Shir 2 tanks. 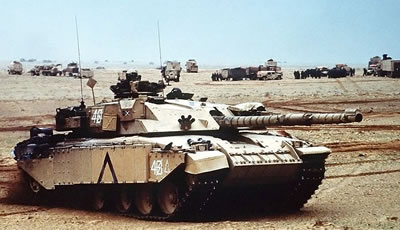 After the Iranian Revolution, the Ayatollah’s government cancelled this order.

The Shir 2 was then used as the basis for Britain’s new FV4030/4 Challenger 1 main battle tank.

The Challenger 1 main battle tank, which entered service with the British Army in 1983, was the first tank to use Chobham composite armor. This armor is made of ceramic and metal and provides a high level of protection against chemical as well as kinetic attacks.

Although the exact composition of Chobham armor is classified, it is believed to contain layers of ceramics, nylon micromesh and other types of specialized armor, bonded with sheets of titanium alloy.

Because it is hard to cast Chobham composite armor in curved shapes, the Challenger 1 is slab-sided.

There is an opening for a Barr and Stroud Thermal Observation and Gunnery Sight System (TOGS) on the right side of the turret.

The turret has a 360 degree traverse, and the main gun can be power-elevated from -10 degrees to +20 degrees. 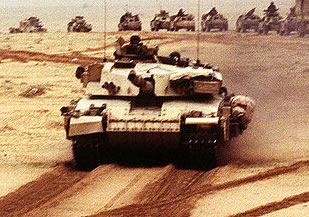 The tank has a Hydrogas hydropneumatic suspension, with six aluminum road wheels and four track return rollers on each side of the tank. There are spaces between the third and fourth road wheels. The idler is in the front, jutting in front of the nose of the tank, and the drive sprockets is in the back.

Skirts cover the upper part of the road wheels and the suspension. These skirts are angled sharply upwards toward the back of the tank, so that the sixth road wheel is partially exposed.

The driver sits in the front center of the hull.

The driver’s hatch is recessed. The hatch cover lifts and swings forward so the driver can drive with his head out of the tank.

There is a wide-angled day periscope behind the hatch.

The driver can leave the tank either through the driver’s hatch or through the fighting compartment, which is in the center of the tank.

The commander, gunner and loader sit in the turret. The commander and gunner are on the right and the loader is on the left. The gunner sits in front of and below the commander.

The commander has nine day periscopes and a day sight, which can be replaced with a swap sight.

Challenger 1 tanks were later refitted with  L30 CHARM gun that can fire an APFSDS-T round with a depleted uranium warhead, in addition to the ammunition listed above.

The L30 CHARM is used on the Challenger 2. 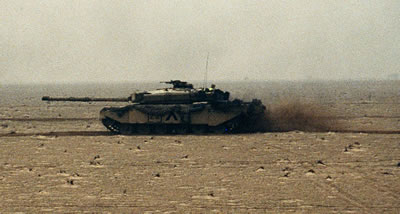 There are five pairs of smoke grenade dischargers.

The engine and transmission are in the back of the tank.

The Challenger 1 has ballistic computers, an NBC system and thermal imaging.

The Improved Fire Control System has a laser rangefinder.

Variants of the Challenger 1 main battle tank include an armored repair and recovery vehicle, a self-propelled anti-aircraft gun and a driver training tank.

A front mounted dozer blade can be fitted to the Challenger 1, to convert it to a mine clearer.

Additional armor protection was added to Challenger 1 MBTs that were used in the Middle East.

The Challenger 1 has also been used in Bosnia.

The Challenger 1 began to be phased out of service in 1998. By 2002, it had been completely replaced by the Challenger 2 main battle tank.

An upgraded model of the Challenger 1 is in service with the Jordanian Army. This model is known as the Khalid.