Japan’s Type 74 main battle tank was designed to be an improvement over the Type 61 MBT.

Mitsubishi began designing the Type 74 main battle tank in 1964. The first two prototypes of the tank, which was then designated the STB-1, were completed in 1969.

More prototypes, known as the STB-3 and STB-6 were then built, and the tank entered production in 1973, at the Mitsubishi Heavy Industries tank plant at Sagimahara.

In 1975, the first production models of the Type 74 main battle tank were finished. 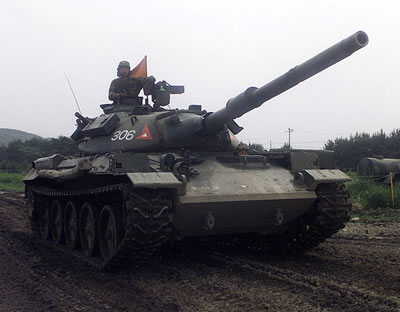 The Type 74 main battle tank has a hydropneumatic suspension. The driver can adjust the tank’s suspension to accommodate movement across different types of terrain.

The driver can raise and lower the front and the back of the tank up to 6 degrees, and he can tilt the tank from side to side, up to 9 degrees.

There are five pairs of road wheels and no track return rollers. The idler is at the front and the drive sprocket is in the back.

It as of all-welded steel hull and a cast steel turret.

The turret is electrically powered and the main gun can be elevated from -6 degrees to +12 degrees (with the suspension, from -12 degrees to +15 degrees).

An infrared searchlight is located to the left of the main gun.

The type 74 main battle tank has a laser rangefinder, an NBC system and a ballistic computer.

Some models have a fitted dozer blade.

A four man crew operates the Type 74 main battle tank. The driver sits at the front left of the hull.  The commander, gunner and loader sit in the turret – the commander and gunner on the right and the loader on the left.

The commander’s cupola has 360 degree traverse.

The engine and transmission are in the rear of the tank.

Variants of the Type 74 main battle tank include an armored recovery vehicle and a self-propelled anti-aircraft gun system.

About 870 type 74 MBTs have been built. The tank has only been used by the Japan Ground Self Defense Force.