Later models of the T-80 have smoke grenade launchers.

The T-80 MBT has infrared night vision and NBC protection. 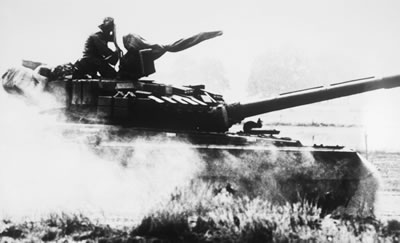 The engine is at the rear of the tank.

There are six pairs of road wheels with gaps between the second and third, and fourth and fifth wheels on the T-80. The idler is at the front and the drive sprocket is in the rear.

In 1976, the first version of the T-80 main battle tank was produced. It had no anti-aircraft gun and it used an optical rangefinder.

It was replaced by the T-80B, which had a ballistic computer, a missile system, a laser rangefinder and a new turret with new type of composite armor, in 1978.

A variant with explosive reactive armor, the T-80BV, was introduced in 1985. Later variants had improved forms of ERA.

Model T-80U, which has a diesel engine instead of a gas turbine engine, a new main gun and a new fire control system, appeared in 1985. Ukraine produced its own diesel version – model T-80UD.

Other variants of the T-80 MBT include a command version and an armored recovery vehicle.

Some variants of the T-80 main battle tank have been fitted with the Shtora-1 active protection system, which disrupts laser target designators and guided missile rangefinders.

The T-80 main battle tank is in service in Russia, Ukraine, Pakistan, Cyprus and South Korea.