The Soviet Union’s T-72 main battle tank has played a part in many conflicts around the world from the end of the twentieth century through the beginning of the twenty-first.

Originally, the T-72 main battle tank was designed to be a replacement for the T-62.

The T-64 was very expensive to produce; the T-72 was designed to be cheaper to build, so that it could easily be mass-produced and supplied to all the other countries of the Warsaw Pact.

In general, the T-72 main battle tank looks very much like the T-64. 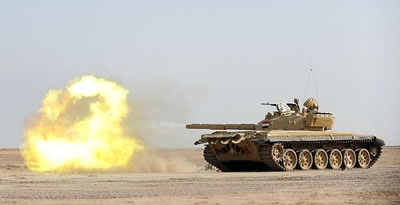 On both tanks, the idler is at the front and the drive sprocket is at the rear.

The main gun on the T-72 has a stabilizer that enables the gun to shoot while the tank is moving.

A three-man crew operates the T-72 MBT. The crew consists of a driver, a commander and a gunner. Like the T-64, the T-72 main battle tank has an autoloader for the main gun so a human loader is not needed.

The driver sits in the front.  The commander and gunner sit in the turret – the commander on the left and the gunner on the right.

The engine and transmission are in the rear.

Auxiliary fuel tanks can be added to the rear of the tank to increase the T-72’s operational range.

Many variants of the T-72 have been developed. These include:

Other variants of the T-72 MBT include command versions, a bridgelayer, a mine clearer, a combat engineering vehicle and an armored recovery vehicle.

The T-72 main battle tank has been produced, under license, in Iran, Iraq, India, Poland, Czechoslovakia and the former Yugoslavia.

It is currently being used by many countries around the world, such as Russia, Ukraine, Georgia, Macedonia, Myanmar, India, Libya, Iran, Iraq, Syria, Yemen and possibly, North Korea.

The Czech company PSP Bohemia offers an upgraded version of the T-72 main battle tank, which is known as the PSP T-72, for export. The PSP T-72 has explosive reactive armor and an improved fire control system.

Since its appearance in the 1970s, the T-72 main battle tank has seen combat many times. It has been used by

It is believed that the T-72 main battle tank is being used by both Gadaffi’s forces and rebel forces during the 2011 uprising in Libya.