The SK 105 Kürassier light tank was designed to be a mobile anti-tank vehicle that the Austrian army could use in difficult terrain.  The Austrian army classifies it as a Jagdpanzer (tank destroyer).

It is based on the Saurer 4K 4FA Armored Personnel Carrier.

In 1967, the first prototype of the SK 105 Kürassier was completed by Saurer-Werke, now part of Steyr-Daimler-Puch. The first pre-production vehicles were built in 1971.

The SK 105 Kürassier light tank weighs 17 tons (17,700 kg). The hull is made of welded steel. Additional armor can be added to the front of the chassis and the turret. 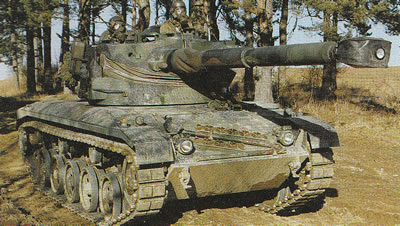 There is a torsion bar suspension, with five road wheels and three track return rollers. The idler is in the front and the drive sprocket is in the back.

A distinguishing feature of the SK 105 Kürassier light tank is its oscillating turret, which resembles the turret on the French AMX-13 light tank.  The turret is divided into two parts. The gun is in the top part of the turret, which pivots on the bottom part.

To raise or lower the main gun, the top part of the turret is elevated. The gun can be elevated from -8 degrees to +12 degrees.

There is an automatic loader in the turret. The loader consists of two revolver type magazines, each of which can load six shells.

The SK 105 light tank is operated by a crew of three – driver, commander and gunner. The driver sits in the front left of the tank. Some ammunition is stored to his right.

The power pack is in the back of the tank.

There is NBC production. The driver and commander have infrared night vision equipment.

A large infrared/white searchligh is located on the right side of the turret roof.

An upgrade kit can be used to convert the tank to the SK105/A1, which has additional armor protection over the frontal arc, a cupola-mounted (0.3 inch) 7.62 mm or 0.5 inch 12.7mm machine gun and an improved fire control system. The main weapon has been modified to allow it to fire AFPSDS rounds.

A later variant, the SK 105/A2 has a new ammunition loading system and a new fire control system.

The SK105 Kürassier light tank is in service in Austria, Argentina, Bolivia, Tunisia and Morocco and Botswana.

It has been used by NATO forces in Kosovo.