It is no longer in service.

In the early 1950s, Switzerland began to work on developing its own main battle tank. 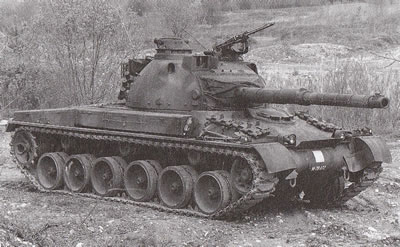 In 1968, the first prototype of the Pz 68 main battle tank was completed.  Production of the Pz 68 began that year.

The Pz 68 MBT has a gun stabilization system, which was not available on the Pz 61.  It also has a modified transmission, a more powerful engine, wider tracks and a greater length of track that remains in contact with the ground.

There is a torsion bar suspension on the Pz 68.  The tank has six pairs of road wheels and three track return rollers. The idler is in the front and the drive sprocket is in the back.

The hull and turret are both of one-piece cast steel.

The main gun can be elevated from -10 degrees to +21 degrees and fires HE, APDs, APFSDS and smoke projectiles.

The engine is in the back of the tank.

A later variant, Pz 68 Mark 2, which approved for production in 1974 and delivered to the Swiss army in 1977, has a thermal sleeve for the gun, a carbon monoxide extraction system and an alternator.

Variants of the Pz 68 main battle tank include a bridgelayer, an armored recovery vehicle and a training vehicle.

The Pz 68 main battle tank was retired from service in 2000.

It has been used only by the Swiss army.