Development of the Merkava began in 1967. The first prototype was finished in 1974 and production began in 1979.

The Merkava MBT first saw combat during the 1982 Lebanon War.

Survivability is the focus of the Merkava’s design. The Merkava main battle tank has an engine that is located at the front, rather than at the back of the tank.  This layout provides an additional layer of defense for the crew if the tank receives a penetrating hit from the front. 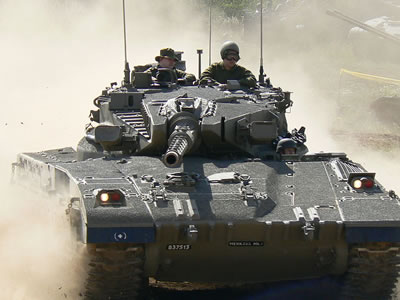 “Merkava” is the Hebrew word for chariot.  The name is associated with the idea that a chariot has its source of power (horses) at the front,  just as the Merkava has its power source as the fornt.

Having doors at the back of the tank means that soldiers can escape from the tank, if necessary, without being seen by the enemy.

Main armament on the original version of the Merkava main battle tank consisted of a fully stabilized 4.13 inch (105mm) M68 rifled main gun with a thermal sleeve and fume extractor. This was later upgrade to a 4.72 inch (120mm) gun.

The turret has 360 degree traverse. The gun can be elevated from -8.5 degrees to +20 degrees

There is a 60mm mortar mounted on the roof of the turret.

The hull of the Merkava MBT is covered in cast and welded armor.   A space filled with diesel fuel is sandwiched between two layers of cast armor, providing protection against HEAT rounds and anti-tank missiles.

A Horstmann suspension allows the Merkava to move smoothly over rough terrain. There is six pair of road wheels and four track return rollers on each side of the tank.  The idler is in the rear and the drive sprocket is at the front. The upper part of the suspension is covered by skirts.

The Merkava main battle tank has a fire control system with a laser rangefinder and a ballistic computer. There is an NBC system and night vision equipment.

Variants of the Merkava main battle tank include: