The Leopard 2 main battle tank is Germany’s primary MBT.  It has been deployed in Kosovo and Afghanistan.

The armies of many countries, including Germany, Austria, Switzerland, Denmark, the Netherlands, Spain and Canada, have used the Leopard 2.

Development of the Leopard 2 main battle tank began as a collaborative effort between West Germany and the United States to design a new main battle tank known as the MBT-70, which would have a Shillelagh missile system. 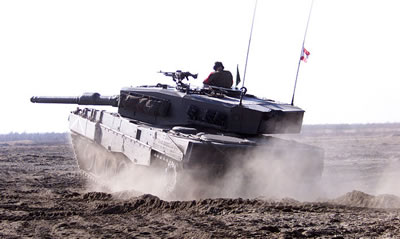 The project became very expensive, and the two countries began disagreeing about the design of the new tank.

In 1969, West Germany withdrew from the project.

The two countries went on to develop their own tanks, using some of the concepts that were intended for the MBT-70. The United States developed the M1 Abrams and West Germany developed the Leopard 2.

Krauss-Maffei (now Krauss-Maffei Wegmann) built the first prototypes of the Leopard 2 main battle tank between 1972 and 1974.

In 1977, the West German army chose Krauss-Maffei as the prime contractor of the Leopard 2 and ordered 1800 tanks – 810 to be produced by MaK and there rest by Krauss-Maffei.

The first production vehicles were finished in 1979.

It has a glacis palate that slopes at a 45 degree angle, and a horizontal hull.

The hull sides and rear are vertical.

There are louvers at the back of the tank extending the entire width of the tank.

The turret has full 360 degree power traverse and can be power elevated from -9 degrees to +20 degrees.

The Leopard 2 main battle tank has an advanced torsion bar suspension, with seven road wheels and four track return rollers on either side of the tank.  The idler is in the front and the drive sprocket is in the back. The upper part of the suspension, the idler and the first two road wheels are covered by armored skirts.

Main armament on the Leopard 2 MBT is a stabilized Rheinmetall L55 4.72 inch (120mm) smoothbore gun that can fire APFSDS-T and HEAT multipurpose rounds.

The main gun has a thermal sleeve and a fume extractor.

The driver sits in the front right of the tank.  The commander, gunner and loader sit in the turret. The commander and gunner are on the right side of the turret, with the gunner in front of the commander. The loader is on the left.

There is a raised engine compartment at the rear of the tank.

There have been many upgrades to the Leopard 2 main battle tank.

Variants include an armored recovery vehicle, a bridgelayer and a driver training vehicle.